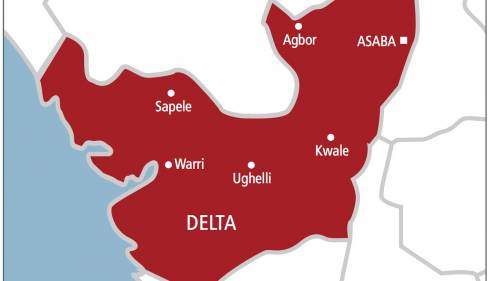 Residents of Evwreni community in Ughelli North Local Government Area of Delta State have deserted their homes after being terrorised by a disbanded armed vigilante group known as “Bakassi Boys” in the area.
The crisis, which occurred on Saturday evening, SaharaReporters reliably learnt, led to the shooting of a former President-General of the community, Victor Ohare, and a yet to be identified soldier as well as burning of houses and cars.

Crisis had engulfed the community since June this year following the disbandment of the local security outfit alleged to be working for the monarch of the town, Oghenekwevwe Kumane, and a former lawmaker, Sam Mariere.

The situation led to the killing of one Sylvester Adjogbe, younger brother to the immediate-past Executive Director, Projects, of the Niger Delta Development Commission, Samuel Adjogbe, and other indigenes.

The killings, it was gathered, led to the arrest of the ex-vigilante Chairman, Tuesday Okuah, the community’s monarch, Mariere, K. K. Kumane, James Asakpa, Ochuko Kumane, Kelly Omojugheri and Stephen Atiri, to Asaba by the Inspector-General of Police team for questioning over the murder of Sylvester Adjogbe, younger brother to Samuel Adjogbe.

Our correspondent gathered that after the questioning, the monarch and Mariere were released on bail while Okuah and three others were moved to Abuja.

Our correspondent gathered that the fresh crisis started after news spread that Okuah had allegedly died in police custody.

Giving account of what happened on Saturday that led to the shooting and burning of houses and cars, an indigene of the community identified as Kevwe, said, “As soon the news came to town that Tuesday Okuah had committed suicide in police custody in Abuja, the boys loyal to him began to shoot guns sporadically in the community with attacks on houses and cars.

“As they were attacking the houses and properties of those they suspected to be behind the arrest of the ex-vigilante chairman, the armed boys shot the immediate past President-General of Evwreni, Victor Ohare and set ablaze two vehicles. The boys also set ablaze the house of Matthew Uba.

“The house of the Odion-Esiri of Evwreni and his car were also set ablaze, the home of Alhaji Unuagha Mumaika, former Chairman of the Delta Muslims Pilgrimage Board was also razed while the car of Willfred Otuedor and the shop of Nathan Oruemu were all destroyed.

“The rampaging armed youths also made several attempts to set ablaze the house of Samuel Adjogbe and that of the former governorship candidate of the All Progressives Congress in Delta State, Olorogun O’tega Emerhor, but were immediately stopped by security operatives stationed at his compound.

“People are parking out of the community and serious shooting by the boys is still going on as at the time we escaped from the town. Government must do something very fast or many people will be killed and properties will be destroyed as well as.”

It was gathered that a combined team of mobile policemen and army have been drafted to the community to prevent any further escalation of the crisis.

Confirming the incident, Delta State Police Public Relations Officer, DSP Onome Onovwakpoyeya, attributed the fresh crisis to news of the alleged death of Okuah, adding that no arrest had been made.

“I don’t know anything concerning the alleged death of the former vigilante leader in police custody but that is the cause of the problem. We are not the ones who arrested him,” Onovwakpoyeya said.