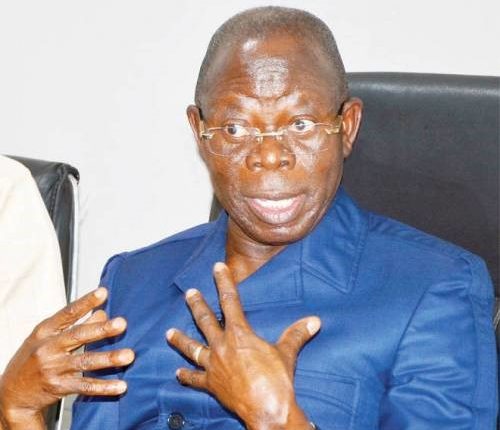 Nigerians Think I am Down After Edo Election But I am Not, Oshiomhole Says After APC’s Defeat

A former National Chairman of the All Progressives Congress, Adams Oshiomhole, on Wednesday said he was not affected by the party’s defeat in the September 19 governorship election in Edo State.

Oshiomhole disclosed this while granting his first interview since the party’s humiliating defeat at the poll to GEE Africa TV.

“No matter the outcome of an election or a particular edition of the process, have faith in God and have faith in our country. God bless you all.”

In the build-up to last Saturday’s election, Oshiomhole had boasted that he was going to teach Godwin Obaseki, candidate of the Peoples Democratic Party and incumbent governor of the state, a lasting lesson in politics.

But by the time the result of the election was read by the Independent National Electoral Commission on Sunday, Obaseki won the contest convincingly, silencing Oshiomhole and other stalwarts of the APC including a former governor of Lagos, Asiwaju Bola Tinubu, who predicted defeat for him.

The governor was disqualified from contesting the APC primary election after he fell out with Oshiomhole over the running of Edo State.

But Obaseki defected to the PDP where he ran for the election and won.

#ENDSARS: Ex-Lagos Governor, Tinubu, Justifies Use Of Force On Peaceful Protesters By…