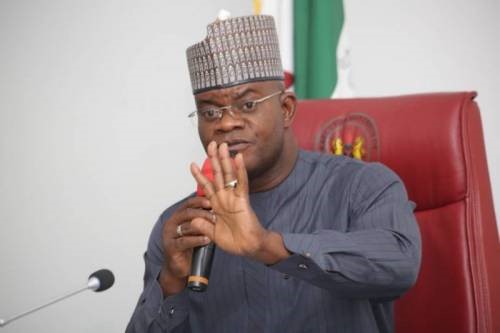 Kogi State governor, Yahaya Bello, has blamed Wednesday’s fatal tanker explosion at the Felele axis of Okene/Lokoja/Abuja Road on the deplorable condition of all federal roads across the state.

Bello said the total neglect of the road by the President Muhammadu Buhari-led government has made life unbearable for motorists and commuters plying the road.

At least 23 persons were confirmed dead and many others injured following a tanker explosion on the road on Wednesday.

Over five vehicles were completely burnt in the road crash and eyewitnesses say some of the victims include students of Kogi Polytechnic.

Sector Commander of the Federal Road Safety Corps in Kogi State, Idris Fika, said at least 23 bodies had been pulled from the wreckage.

Following the incident, Bello visited the Minister of Works and Housing, Babatunde Fashola, on the need for the Nigerian Government to fix the road and others across the state.

His spokesperson, Onogwu Muhammed, in a statement said the governor told the minister that the deplorable state of all federal roads across the state have led to recurrent accidents in the state.

The statement reads, “He said the state government has done a lot in maintaining the roads but owing to the large volume of traffic on the roads, in view of its strategic location as gateway state, such repairs and maintenance do not stand the test of time.

“He appealed to the minister to expedite action in carrying out reconstruction of roads across the state to curtail the preventable accidents on the road.

“The governor appealed to the minister to direct contractors handling repairs on the Murtala Bridge at Jamata to speed up the rate of work, noting that the slow pace of work has caused the commuters untold hardship.

“Bello informed the minister that he had to personally be on ground on the Lokoja -Abuja road on July 26 to help other agencies to control the traffic gridlock caused on the Lokoja-Abuja Road as a result of the damaged portion of the bridge.

“He equally urged the minister to direct the contractors handling the Kabba-Ilorin road to return to site, noting that the total neglect of the road in the area has made life unbearable for motorists and commuters plying the road.

“The governor also drew the attention of the minister to the Lokoja-Ganaja-Ajaokuta Road which the federal government awarded for over three years but contractors were yet to be seen on site.”

Nigerians Think I am Down After Edo Election But I am Not, Oshiomhole Says After APC’s Defeat

Delta Pensioners Raise Alarm Over Delisting Of 1,000 Retirees From Scheme