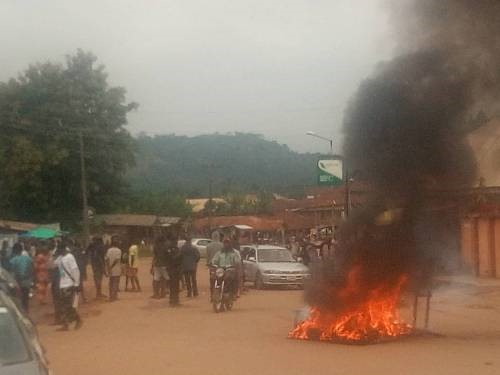 A middle-aged man identified as Taye has been killed by armed political thugs in Idanre Local Council Area of Ondo State.

The man, a staunch supporter of the Zenith Labour Party, was murdered on Wednesday night.

Our correspondent gathered that the man was trailed to Alade area of Idanre before he was brutally murdered by the hoodlums suspected to be working for the All Progressives Congress.

His gruesome murder has further heightened tension in Idanre community ahead of the governorship election slated for October 10.

A source in the community, who preferred to remain anonymous, told our correspondent that the thugs were allegedly led by one Sunday Ogundiroyo (Aka Agarahu) and Bola Akinniranye.

The source accused the two ring leaders of being members of the APc, who had been causing mayhem in the Idanre community.

“The man (Taye) was attacked and killed at Alade yesterday around 9pm and those who led the thugs to perpetrate the crime have run for cover but we have declared them wanted.

“When has it become a crime to be a member of an opposition party in the state? These thugs killed the man because he simply put on the cap of the Zenith Labour Party and was our main supporter in the community,” he said.

He revealed that the corpse of the deceased had been deposited at the General Hospital in Idanre while the police had begun an investigation into the murder case.

Confirming the incident on Thursday, Chairman of ZLP in Idanre, Mr Ademehintoye Claudus, said the thugs were sponsored by chieftains of the APC, who had been attacking members of opposition parties in the Idanre community.

He said, “Taye was killed by the APC thugs yesterday because he was canvassing support for the ZLP being a member of our party.

“What happened has also confirmed that the APC is calling for war in this election because they have been attacking us.

“In fact, the party has broken the peace accord reached at the palace of the monarch of the community with other political parties ahead of this contest.

“We have appealed to our members and supporters to remain calm even in the face of this provocation and asked them not to take laws into their own hands.”

Steve Otaloro, Director of Media and Publicity of the APC in the state, said he was not yet aware of the incident when contacted by our correspondent.

He promised to verify and get details before reacting to the accusation.

Spokesperson for the police in Ondo State, Mr Tee-Leo Ikoro, was not available for comments at the time of fthis report.

Meanwhile, residents of the community have trooped out to protest the murder of the ZLP supporter.

The angry residents made bonfire on the main road leading to Idanre, calling for the arrest of those behind the heinous crime.