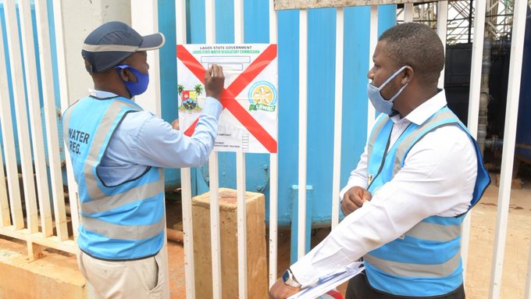 LSWRC executive secretary Funke Adepoju told journalists at the site of the plant that the decision to seal was aimed at protecting residents from consuming unhygienic water.

“The regulatory compliance seal order on BIPORAL water plant supplying water to residents of Banana Island was sequel to tests earlier conducted by LSWRC, which revealed that the water quality of the plant was unsafe for consumption and required improvement treatment,” Adepoju said.

The LSWRC boss stated that the plant will remain shut until necessary improvements are carried out by the service provider in line with the drinking water quality control of the state government.

She noted that the Lagos State Government is concerned about the quality of water consumed by residents and insisted that “no unwholesome practice” will be tolerated in the state.

“All water producers and private service providers in residential estates in Lagos are all obligated by the Lagos State Environmental Management and Protection Law 2017 to deliver water that meets quality specified by the regulator,” Adepoju said.

Failure to comply with the law, Adepoju said, will attract stipulated punishment by offenders.