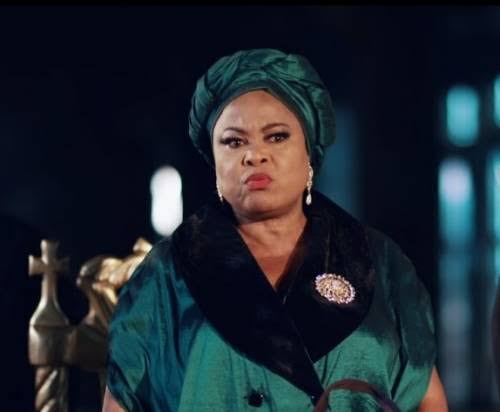 I Am Not Wicked, I Am A Typical African Woman – Sola Sobowale

Sola Sobowale, a veteran Nollywood actor has mentioned that she started her career in acting very well, and that if there still is another life, she will still love to be an actor.

This she made known during a live interview with Mrs. Temitope Duker a.k.a The Boss Lady on her popular Radio program Serenade with the Boss Lady on Fad93.1 fm Calabar.

She further revealed that her parents where both academicians, and wanted her to become like them “a teacher”. But, destiny turned around for her when she came in contact with her brother-in-law, Mr. Tunji Oyelana.
According to her, “I started my career in acting with my brother in law, Mr. Tunji Oyelana, who was at that time a lecturer in the Department of Theatre Art, University of Ibadan.”
The Veteran actor added that Tunji Oyelana became more like a father to her and her siblings after the death of her biological father.
“I Joined him in the movie Sura The Tailor, then moved to Lagos to join village headmaster, the mirror and the sun, then I proceeded to Osmosis, after which I moved to NTA. I was living in NTA, although, I was not a staff of NTA. But, because I loved and wanted to do better in my career, I became NTA’s Rat” she added.
Meanwhile, Sola Sobowale also mentioned that God ordained her to do the acting job. Revealing that she has done a lot of jobs without being paid. “I was focused until crumbs and little coins started coming” she added.
Do you consider Mr. Tunji or any other person in the movie industry as your mentor? Mrs. Temitope Duker asked.
In response, Sola Sobowale mentioned that God is her mentor. She also said that her parents where her human mentors.
Meanwhile, she added that she loves people for who they are and that her job is done by collective effort.
The veteran actor also made it known that for anyone to succeed, such a person must be focused and determined, and most importantly must be prayerful too. “When I was wasn’t paid, I didn’t leave, if I am broke, I go home to get money from my parents and then go back to Lagos” she said.
In a bit to advice young and intending filmmakers, the veteran actor advice that they forget their beauty, “beauty doesn’t bring it home, hard work, not shortcut does. If you are a lady, beauty and cutting corners will never take you to the promise land” she said.

In response to questions about her lifestyle outside the movies, she said “I am not wicked, I am a typical African woman, who respects elders and work with serious minded people.”
In conclusion, Sola Sobowale emphatically observed that there is nothing like the old and new Nollywood, but said that Nollywood has only evolved. According to her, Nollywood in time past wasn’t as productive as it is today. And added that there are a lot of opportunities in Nollywood today. The veteran actor also noted that before actors where viewed as dropouts, prostitutes, but today even parents desire to have their children trained on how to act.