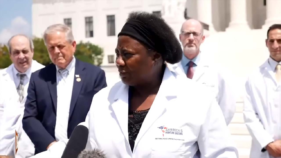 There has been a global reaction following a claim by an African doctor, Stella Immanuel, that hydroxychloroquine has been proven to be an effective medicine to combat and cure COVID-19 patients.

Texas-based Dr Immanuel had made a video where she revealed that she had successfully treated over 300 persons infected with the virus.

In her video, she also revealed that hydroxychloroquine can be used to protect persons from being infected with the virus, adding that she and her medical team had been using the drug to keep themselves safe.

She said, “I have personally treated over 350 patients with COVID-19.

“We have not lost one patient and on top of that, I have put myself and staff and everybody that I know on hydroxychloroquine.

“We see patients, 10 to 15 COVID patients everyday. We give them breathing treatments.

We only wear surgical masks. None of us has gotten sick. It works.”

She queried why top pharmaceutical companies in the United States of America were dissuading the US Government from endorsing the use of hydroxychloroquine.

“If some fake science or some person sponsored by fake pharma companies comes and says it does not work, I can tell you categorically that it is a fake science,” she added.

However, reactions have trailed her claims with many questioning her certificate and science.

America’s Frontline Doctors described her claims as propaganda, urging citizens to ignore her.

“If Americans continue to let so-called experts and media personalities make their decisions, the great American experiment of a constitutional republic with representative democracy, will cease,” it says.

Abraham Ariyo, a resident of Texas, questioned her claims, stating that Dr Immanuel did Residency in Pediatrics at Bronx-Lebanon in New York and it remains unclear how she crossed from Pediatrics to Adult Medicine/Emergency and treatment of a 96-year-old patient.

“She is not a Nigerian. She is a Cameroonian. She is the owner of Fire Power Deliverance Ministry. She attended University of Calabar in Nigeria and graduated in 1990.

“She did Residency in Pediatrics at Bronx-Lebanon in New York. She was intern under Dr Babatunde Dosu, one of our Pediatricians here in Dallas.

“She has medical licenses in Louisiana, Texas (November 2019) and Kentucky.

“It remains unclear to me how she crossed from Pediatrics to Adult Medicine/Emergency to treating a 96-year-old patient.

“Nonetheless, there is a ‘Gofundme’ page for legal troubles in her name, maybe to cash in.

“Also, reliable sources have confirmed that this campaign is politically motivated and sponsored by Steve Bannon’s BREITBART.

“Remember none of them were wearing masks. Also, this campaign tends to look for ‘easy manipulated doctors’ like Trump’s 2016 strange physician,” Ariyo said.

Some other persons have also labelled the claim by Dr Immanuel as an agenda by President Donald Trump to push his position on the use of hydroxychloroquine.

“Trump campaign is using this Nigerian-trained doctor in Texas to defend hydroxychloroquine as a cure for Coronavirus. She also suggested that people should not wear face masks. Please watch it.

“The stunt was not a news conference. There were no news persons there. The sponsoring organizations, Turning Point USA and Breibart made the recording and posted it on Twitter and other right-wing forums. Both organisations are right-wing gigs. Bannon, Trump’s former Special Adviser, used to run Beibart,” another observer, who asked not to be named, said.

The video has been trending since it first surfaced on the Internet.

Top social media platforms — Facebook and Twitter — are beginning to restrict and take down the video to curb the spread of what it described as unverified and unproven facts on COVID-19 and its treatment.

C’River Primary Health system under Ekpenyong – the story so far