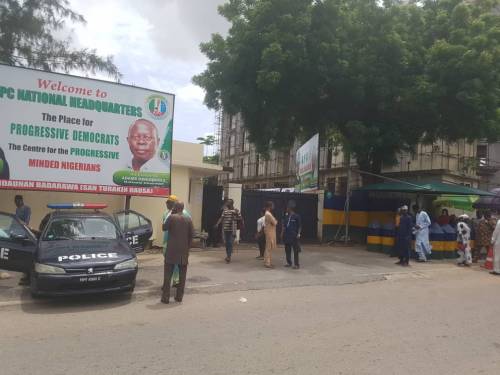 Police men on Tuesday morning have stopped members of the National Working Committee of the All Progressive Congress from gaining entry into the complex. This is due to the level of crisis currently rocking the party.

According to reports from our sources, it was gathered that Victor Giadom claimed to have been implementing a court order that pronounced him the Acting Chairman of the party.

Security operatives who spoke with our sources mentioned that said they were acting on orders from the above by preventing staff of the APC Secretariat, journalists and others from gaining entry into the building.

Staff and members have left to stand anticipating possible, the questions in the hearts of All Progressive Congress National Working Committee and staff has remained unanswered till now.

At the time of this report, additional policemen had been deployed to the area to ensure the complex remains closed and no APC allowed access.