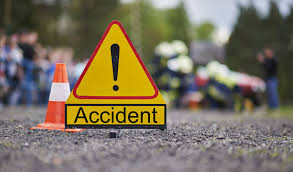 Road accident has continued to be a challenge to road users. The more reckless drivers and other road users become, the more increase the chances of road accident.

This morning, a fatal accident has occurred on Otedola Bridge around Berger area of Lagos State, one person has been reported dead at the sport and several others injured.

The accident happened on Thursday morning around Mobil petrol station inward Berger and has claimed the life of an unidentified female passenger.

As at the time of this report, the actual cause of such life threatening accident was yet unknown, According to an eyewitness who spoke to our correspondence, it was gathered that a loaded tanker lost control and bumped into an inter-state commercial bus. “A woman died and her body had been taken to the mortuary,” the eyewitness added. It is therefore noteworthy that road users over traffic rules and stick to the Federal Road Safety Commission stipulated speed limits while driving in order to avoid unnecessary road accident.

School Children, Over 20 Others Burnt To Death As Tanker Explodes In Kogi