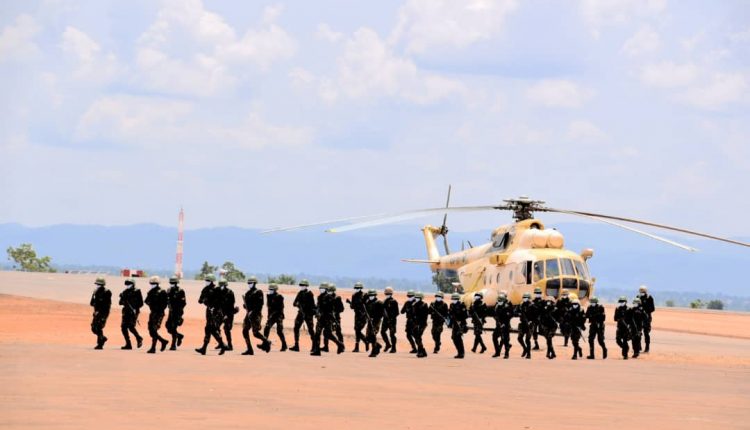 The Defence Headquarters says the Air Task Force of Operation Lafiya Dole (OPLD) on Monday, destroyed the logistics base of the Boko Haram/Islamic States of West Africa Province (ISWAP) at Njimia on the fringes of Sambisa Forest in Borno.

The Coordinator, Defence Media Operations, Maj.-Gen. John Enenche, in a statement on Tuesday in Abuja, said the operation was in continuation of the onslaught against terrorist targets in the North East.

He added that the mission led to the identification of the nondescript cluster of structures within the settlement being used by the terrorists to house their fuel and other logistics.

According to him, the Air Task Force dispatched an appropriate Force Package of attack aircraft and a surveillance platform to take out the target.

“The Nigerian Air Force (NAF) attack assets scored accurate hits in their bombing runs on the target area, completely obliterating the logistics stores as well as causing damage to several other BHT structures in the settlement.

“The Chief of the Air Staff commends the Air Task Force for their professionalism and directs them to remain resolute towards eradicating the terrorists from the North East,” he said.

He said the ambush took place eight kilometers ahead of Buni-Gari in Gujba Local Government Area of Yobe leading to the killing of two soldiers while three other soldiers sustained injuries as a result of the IED explosion.

According to him, a recovery truck, one troops carrying vehicle and a water tanker that ran into the IED were destroyed by fire.

“Three terrorists were neutralised, while unconfirmed number escaped with various degrees of injury.

“The Armed Forces of Nigeria will remain unwavering in its quest to end the terrorism and will do everything possible to ensure there is no repeat of this kind of traumatic incident.

“The Military High Command commends troops of Operation Lafiya Dole for their unwavering determination, hardwork and resilience,” he said.