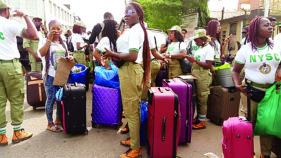 Corps members who have been deployed to their Places of Primary Assignment (PPAs) have expressed dissatisfaction over the suspension of camp activities, insisting that they will be safer in camp.

This followed the outbreak of coronavirus, which led to the suspension of orientation course for the 2020 Batch ‘A’ Stream One corps members nationwide.

The orientation course, which should have lasted 21 days have been halted six days after swearing-in over the fear of the spread of the disease among the 2,116 corps members deployed to Plateau State.

Corps members, who were greeted with the news by the state Coordinator, Caroline W. Embu at 5 am during morning meditation, said they felt safer in camp rather than being allowed to leave.

One of the corps members, Damilola, said she was happy to leave upon hearing the announcement because of Man O’war drills, but on second thought, she said feel safer in camp than outside it.

Another corps member, Tochukwu Harison, said it was sad to leave camp in such a hurry less than two weeks of orientation activities, without a proper grasp of the security tips and way of life.

While addressing the 2019 Batch A Stream Two corps members during the swearing-in ceremony, Embu assured their parents and guardians that the scheme had established a partnership with the Jos University Teaching Hospital (JUTH) and Ministry of Health as the scheme remains alive to its core responsibility of catering to the welfare and general well-being of graduates serving in the state.

Head of Public Relations Unit, Mrs. Jennifer Laha, disclosed that although all NYSC officials and corps members have tested negative, it was necessary for them to know that the suspension of camp activities was a precautionary measure to ensure that the disease did not spread among graduates across the country.