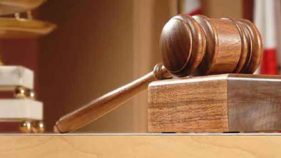 The Court of Appeal in Abuja on Thursday reversed the judgment of the High Court of the Federal Capital Territory (FCT) that sacked Ifeanyi Ubah as a Senator.

But a three-man panel of the court, led by Justice Stephen Adah said the judgment was given without jurisdiction.

Justice Adah said Ubah was denied fair hearing by the FCT High Court and ruled that the certificate forgery case against Ubah was a nullity.

The judge said the record of proceedings before the FCT High Court showed that there was no evidence that Ubah was served with processes in relation to the case.

Justice Adah stated that the originating summons of the case which was heard before the FCT High Court was not signed by any lawyer as required by the Rules of the High Court of the FCT.

The judge granted an injunction restraining the Clerk of the Senate and the Independent National Electoral Commission (INEC) from acting on the FCT High Court verdict.