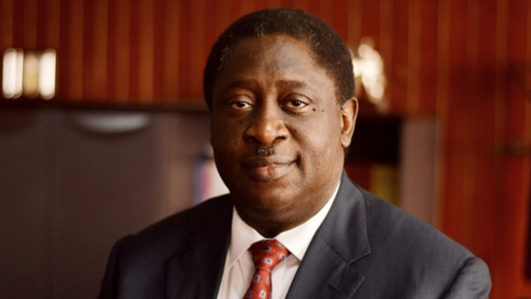 Piqued by his role in the recent postponement of the 51st convocation of the University of Lagos (UNILAG), members of the Academic Staff Union of Universities (ASUU) in the institution have demanded the immediate removal of the pro-chancellor, Dr. Wale Babalakin.

The decision was reached at an emergency congress called by the teachers to review the affairs of the university.

Rising from the meeting, the teachers deplored the role of Babalakin in the suspension of the convocation and said the university could no longer tolerate his excesses.

The protesting ASUU members, who were led by Dr Dele Ashiru, marched round the campus with a stern warning to the pro-chancellor to stay away from the university.

Ashiru, in an interview with The Guardian said: “ The congress took reports on the untoward activities of the pro-chancellor in the University of Lagos since his assumption of office, noted his meddlesomeness in the day-to –day running of the university, observed his tyrannical and dictatorial tendencies, his flagrant disregard for rules and regulations in the institution, his contempt for intellectualism and the Senate of the university, which is the highest authority on academic matters on campus, and more particularly, the congress noted his misinformation from his office to the Ministry of Education which caused the unwarranted postponement of the 51st convocation ceremony.

“Taking all of these infractions together, the congress decided that a vote of no confidence be passed on him as the pro-chancellor of the university such that the visitor to the university should please relieve him of that position.

Ashiru explained that the protest was to literally escort the alleged tyrant out of the campus.

“We voted against his tyrannical and leviathan activities on campus. Babalakin cancelled the convocation of over 13, 000 students only to go and attend the birthday ceremony of his friend in London,” he said.

The ASUU chief said the union would write the visitor to the university through the National Universities Commission (NUC) on the need to relieve Babalakin of his position.

On the claim that the pro-chancellor was not carried along by the university management on the programme of activities for the convocation, Ashiru said: “That was a lie, we have evidence to show that the council approved the budget, and those to be awarded doctoral degrees. Those were the things that the union considered at the congress before arriving at this position; we believe that it was a deliberate misrepresentation of fact, that claim by Babalakin is not correct. We have evidence, the minutes of council meeting where all these discussions took place are with us.

“We want the government to remove him as our pro-chancellor, we don’t want him anymore and we shall not accept his authority anymore on this campus.

“It has been a turbulent session as a pro-chancellor. Last year, he unilaterally stepped down the recommendation of Senate to appoint somebody as a distinguished professor of the university. He has done too much damage in this university; we don’t want to see him again,” Ashiru added.

Efforts to reach Babalakin for reaction to the development failed. Several calls to his phone lines were not answered. A source claimed that he was in London, United Kingdom, attending a friend’s birthday.