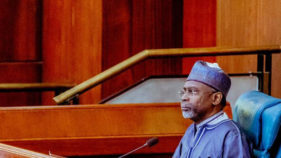 House of Representatives yesterday ordered an immediate probe of the cleanup of spills and remediation in oil-producing areas of the country in the last five years.

Considering a motion sponsored by Abubakar Hassan Fulata at plenary presided by Speaker, Femi Gbajabiamila, it resolved to set up an ad-hoc committee to probe activities of the National Oil Spill Detection and Response Agency (NOSDRA) in the Joint Investigative Visits.

It also resolved to investigate the extent of compliance with the Environmental Guidelines and Standards for Petroleum Industry in Nigeria (EGASPIN) and report within eight weeks for further legislative action.

While moving the motion, Fulata (Jigawa APC) expressed concern over the sufferings in the Niger Delta region as a result of over 50 years of oil spills and subsequent pollution of the freshwater system, degradation of water quality and lowering of food web productivity.

He said he was privy to information that life expectancy in the country stood at 55 years whereas in the Niger Delta it was lower by 10 years due to pollution.

He claimed that the annual report of the Department of Petroleum Resources (DPR) indicated that 569 incidents of oil spills were conveyed with 9718.22 barrels spilled and only 800.55 barrels were recovered, while thousands of barrels of oil were lost to the environment.

The lawmaker noted that increase in oil revenue to the nation was contingent on the peace and harmony that reigns in the oil-producing areas, adding that with the current drift in global oil prices, failure to clean up impacted sites would create tension in the communities, which may impact national oil production.

He stated that quick detection of oil spills, visits to the spill sites and prompt cleanup were necessary to avoid severe impacts on the environment, pollution of potable water sources, which make it a major threat and negate the attainment of United Nations Sustainable Development Goals (SDGs).

He said he was aware that the National Oil Spill Contingency Plan and EGASPIN provided the adequate framework to contain oil-spill incidences, adding that despite the institutional framework, cleanup of spills and remediation continue to generate concerns, while affected communities continue to live in a polluted environment that endanger their vulnerable lives.

The National Working Committee (NWC) of the ruling All Progressives Congress (APC) yesterday met behind closed doors with the suspended National Chairman of the party, Adams Oshiomhole, conspicuously absent.

The Guardian learnt that the March 17, 2020 emergency National Executive Committee (NEC) meeting, billed to be attended by President Muhammadu Buhari, topped the agenda of the issues discussed at the parley.

Meanwhile, the party’s state chairmen forum appeared to be divided on the issue of the suspension order slammed on Oshiomhole.

Publicity Secretary of the forum, Mr. Lawal Liman, dissociated himself from what he termed “the fraudulent vote of confidence” passed on Oshiomhole by the forum’s Chairman, Ali Bukar Dalori and Secretary, Dr. Ben Nwoye, on Monday.

He said that it was untrue that state chairmen actually met in Abuja and endorsed Oshiomhole’s continuous stay in office.

He said that he had been inundated with calls by some chairmen to find out the veracity of the statement.

Liman, who enjoined party members to wait for the outcome of pending court cases on the issue of Oshiomhole’s suspension, expressed optimism that the crisis rocking the party would soon be resolved.

He said: “I want to confirm to my colleagues that there was no meeting held and there was no statement issued to pass a vote of confidence on the national chairman.

“All issues would be resolved at the next NEC meeting and, hopefully, we will hold a meeting of the forum before the said NEC meeting. We will not, in any way, bring the name of the forum to disrepute by doing what will take away our credibility.”

Nigerian Footballer Dies After Collision With an Oponent.