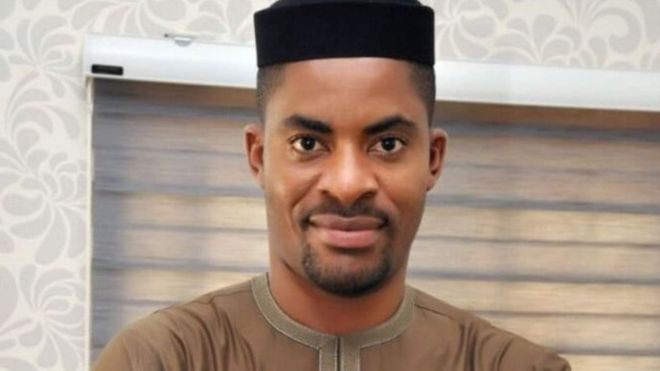 How Adeyanju backed Social media regulation under PDP, turns against it under APC

Contrary to his open opposition to the regulation of the Nigerian social media space, for Peoples Democratic Party head of New Media, Deji Adeyanju is in full support of the total sanitization of the social media and tracking of those promoting hate speeches, treason and other vices plaguing the land. In a two-page proposal he submitted to the federal government, Adeyanju, particularly picked out twitter, one of the most powerful social media tools as the medium that Nigeria’s secret police, the Department of State Services, should adopt and deploy in scaring those using it for ulterior motives by first of all establishing its presence on the media space with a special handle.
In the document, which Vanguard obtained last night, the Convener of Concerned Nigerians wrote: “I write as a concerned Nigerian who has been watching the dangerous trend of New Media (Social Media) in Nigeria especially Twitter. Nigerians over the years have never been this Free before, so now, Social Media poses a new threat not just to national security but also to our unity since there is no law regulating the space. “It is a free space where anyone without identity can just say anything and get away with it. People now use social media to carry out various campaigns like public incitement, treasonable felony, and even demoralizing and maligning our security agencies,” the activist wrote. Adeyanju, who has been having some issues with security agencies over various local and national issues lately, went further to enumerate the benefits which the Nigerian security agency would derive by setting up a special Twitter handle. He said: “Since Twitter delivers Instant Messaging, millions of Nigerians on the platform can give useful information to the DSS without fear. Everyone with useful information can easily tweet at the DSS handle in seconds. The Twitter handle of the DSS will encourage tweeps to volunteer information either through a tweet or DM (Direct Message) and assure them of confidentiality.
“Your presence will instantly bring sanity to the social media platform because everyone who has been reckless in information sharing will become careful since there is now an Invincible Eye on the platform reading all their tweets. You can also use this medium to gather data and information covertly. Your handle should also once in a while issue Cautionary Warning to any author/media house of inflammatory write-ups or agitations and those who compromise national security. On how the security agency could possibly achieve the goal, Adeyanju suggested: “The DSS will need a very competent officer to use their Handle, especially someone with experience in Information Management and Public Relations. Diplomacy and Intelligence should be the watchword of this handler. “The CIA, FBI, etc are all on social media already. The CIA is not following a single individual in the U.S or abroad. They are following 25 American Government Agencies which should be the same strategy applied here in Nigeria. Your presence on Twitter will be both a psychological and warfare strategy as we now witness the exodus of so many Boko Haram sympathizers on social media. “The DSS account should be immediately verified as soon as it is registered and should be announced by all national media as this was the same strategy the CIA used: In three weeks, the CIA now has over 631,000 followers.
“Conclusively, I plead with the service to come and sanitise the social media platform with their presence alone. I, for one, would become so scared the moment I discover that the DSS has started following me and will contemplate two actions immediately I notice this: either I de-activate my account or delete all incriminating tweets. The Service does not need to say anything on Twitter; your presence alone on the platform is scary enough. There is also the need to have a similar verified Facebook account. I am obliged,” the former PDP social media leader, concluded in the memo dated July 7, 2014.
However, in what now appears as a change of mind, Adeyanju has reacted angrily to the proposed move by the National Assembly to enact a law to check internet falsehood and deception on the social media with a bill sponsored by Senator Mohammed Sani Musa. In a recent post, activist Adeyanju said he would mobilize other Nigerians to stop the passage of the social media regulation bill, which he described as tyrannical and an assault on media freedom.

Trump reacts to Harry and Meghan’s royal step back