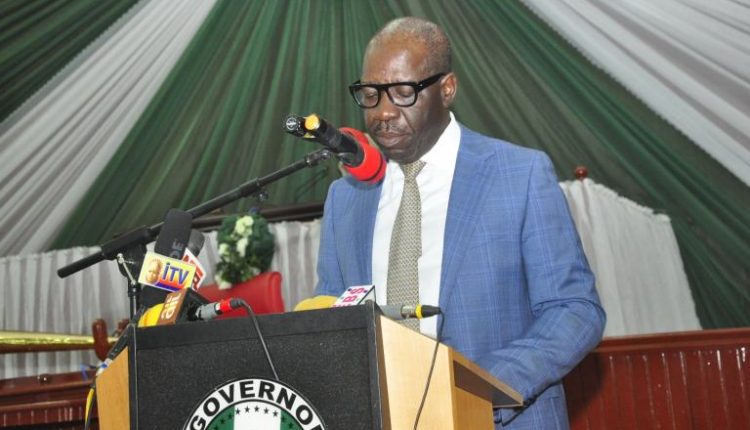 The Edo State Government has assured of continuous support and empowerment for returnee migrants in the state, noting that numerous initiatives are ongoing to ensure that they are well catered for and reintegrated into the society. Chairperson, Edo State Taskforce Against Human Trafficking (ETAHT), Prof. Yinka Omorogbe, said this during the disbursement of the yuletide gift items donated by the state governor, Mr. Godwin Obaseki to the returnees.

According to Omoregbe, “We have better plans for the returnees this year. We will continue to cater for their welfare, and link them to empowerment and job opportunities. We will also help those with challenges and provide counseling, where necessary.”
She said that the taskforce has commenced the disbursement of the governor’s yuletide gift items to the returnees which include five cows, N5 million, and bags of rice. “We are happy that we were able to fulfill the promise made by the governor to the returnees. The money is being disbursed to the returnees, while the cows were slaughtered by the returnees and shared among themselves,” she said. Omorogbe noted that every returnee who showed up for the exercise would be given the gift items, adding, “This is an ongoing exercise and for now we cannot say how many people will benefit because we have over 5,000 returnees in the state.” She added that sharing of the 20 bags of rice was put on hold as the returnees had requested to use them to hold a feast.
Some of the returnees who received N6,500 each commended the state governor for fulfilling his promise to them. Mr. Ambrose Irene, one of the beneficiaries, said “I thank the governor because he is the godliest governor I have ever seen. This is the first time I will be benefiting from such a yuletide gesture from the state government. The governor is a good man and I wish him a second term.” He assured of judicious use of the money given him, noting “I am a farmer and also a builder. I will use from this money to cultivate my farm this planting season and make a profit.”