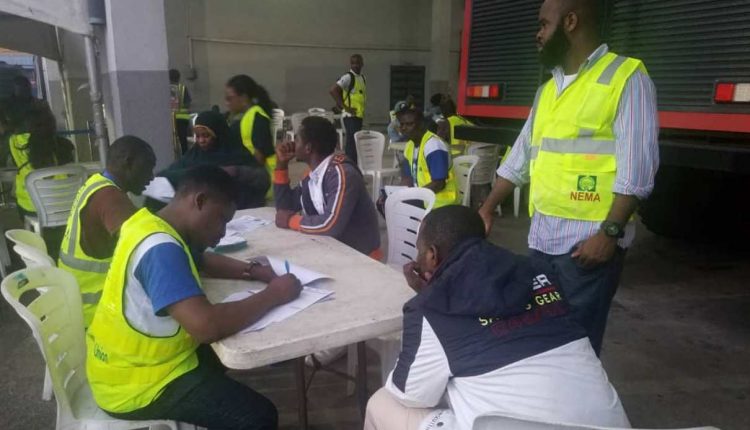 About 168 stranded Nigerians return from Libya

The National Emergency Management Agency (NEMA) on Friday received another batch of 168 stranded Nigerian returnees from Libya. The Acting Coordinator, NEMA Lagos Territorial Office, Mr Ibrahim Farinloye, received the returnees on behalf of the Director-General of NEMA at the cargo wing of the Murtala Muhammed International Airport in Lagos.

Farinloye told newsmen that the returnees arrived in the country aboard a chartered Al Buraq airline with flight number UZ289/190 at 5:42 a.m after 12 hours delay. He said that 38 female adults, five female children were returned with 109 adult males, six male children and 10 infants, among others.

He said that this had brought the total number of returnees from Libya from April 2017 to date to 8,096 males and 5,788 females. “This has brought the total number of returnees brought to Nigeria from 16 countries to 15,731 since April 2017 to date. Farinloye, while qouting the summary of the special EU-IOM and Federal Government intervention from 2017 to October 2019, said that Libya had the highest number of returnees with 8,096 males and 5,788 females. ” Nigeria returnees from Niger Republic stood at 1,043 males and 556 females; Morocco male 42, female 37; Liberia male eight and female four. ” Burkina Faso male six, female 18, France male three, female one, while Ireland had only one female, but countries like Poland, Austria, Gambia, Mauritania, Ethiopia had one male each assisted back. ” Chad had one male, two females and Cote D’ivoire had only two females brought back within the period,” Farinloye said. According to him, ”Estimated, adults males are 54 per cent, 37 per cent are for female, while male and female minors stood at four per cent each. ALSO READ: SUPREME COURT JUDGEMENT: The fall of Eruwa monarch ”In the same vein, the distressed migrants brought back per state of origin shows that Edo State topped the list with 40.6%, Delta 13.3%, Ogun 6.2%, Imo 4.7%, Lagos 4.3%, Oyo 4.1%, Yobe 3.6%, Kano 3.1% and Osun with 2.9%, while other states complete the rest.” He said those who suffered various degrees of torture were 31 males and 21 females, while unaccompanied minors that were assisted back in males were 66 males and 67 females. Farinloye added that those who were kidnapped out of Nigeria, but assisted back to the country were 79 males, 31 females, while single parents male were 41 and female were 616. He said total number of pregnant women brought back so far were 439, while those with various medical issues were 592 males and 804 females. Migrants assisted back with psychosocial needs are 523 males and 470.

ICPC, others harp on war against corruption