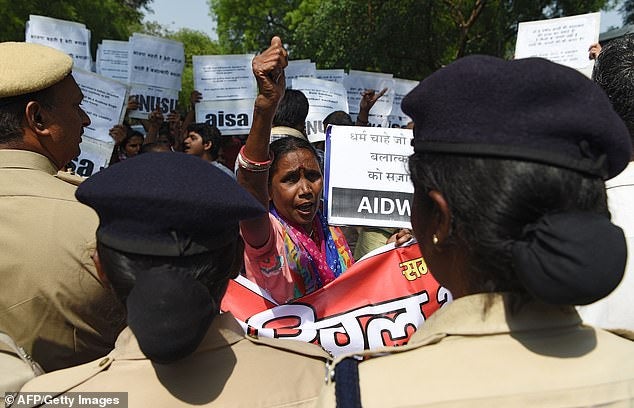 killer admits having sex with victim’s corpse for three hours

A perverted killer who murdered three family members before having sex with the mother’s corpse was arrested in India on Monday.
Nasiruddin, 38, was seized for the murder of a couple and their four-month-old son, who were discovered dead and naked in their home a week ago in Uttar Pradesh. The man, who has been described as a ‘sex maniac’ and a ‘necrophile’, admitted to breaking into the family home at night, bludgeoning the father, 35, with a ‘heavy stone’, before slaying the 30-year-old mother. After killing the parents, Nasiruddin murdered the couple’s four-month-old son and then defiled the mother’s corpse. The man had sex with her dead body for three hours. He then raped and injured the 10-year-old daughter and attacked her four-year-old brother.
‘He also admitted to taking a stimulating drug and carried condoms for perpetrating the crime,’ police investigator, Azamgarh Triveni Singh, told the Indo-Asian News Service. Police said that Nasiruddin had committed similar crimes across northern India. The perverted killer showed the footage of the crime to his sister-in-law who was shocked, according to police. It’s unclear whether she played a part in his arrest. The horrific triple murder and desecration comes a month after two teachers in Gujarat were accused of raping a 15-year-old blind girl over a two month period in a school for children with disabilities. A month earlier, a wife in India was gang-raped by her nephews and forced by her ex-husband to drink acid in front of her young daughter.