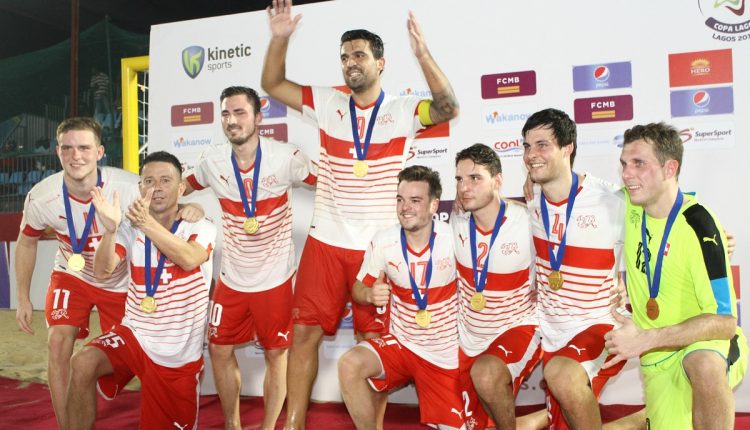 The 2016 Beach Soccer African Cup of Nations begins  at the e Eko Atlantic City in Lagos on Tuesday.

Madagascar take on Libya in the first match of the competition while Senegal tackle Morocco  in the second match.

Senegal and Ivory Coast play the first Group A match before hosts Nigeria face Egypt in the last match of the day.

The Supersand Eagles, who began camping for the tournament last month in Badagry, will be seeking their third title at the competition, which  ends  on December 18. Nigeria have won the competition twice – in 2007 and 2009. Senegal  won the title in  2008, 2011 and 2013.

Nigeria  tested their readiness for the competition with an 8-3 loss to Switzerland on Sunday at the Copa Lagos Beach Soccer Tournament at the same venue.

Winners and runners-ups of the competition will represent the continent at the 2017 FIFA Beach Soccer World Cup in the Bahamas.

Nigeria captain,  Isiaka Olawale, believes the team are ready to win the competition for a third time.

“Sunday’s match, which we lost to Switzerland, is not enough to judge the team. If any team should judge us based on that, it will be a mistake when the competition begins,” Olawale told our correspondent.

“The team has trained together and we are ready to challenge for the title once again. The World Cup qualification is a goal that we want to achieve as well after missing out on the last one.

“The goal is to take each game as it comes and now the focus is on the Egypt match, which we will work hard to win.”

‘Everyone hates you’ – Pickford gets ‘p*ssed off’ by…